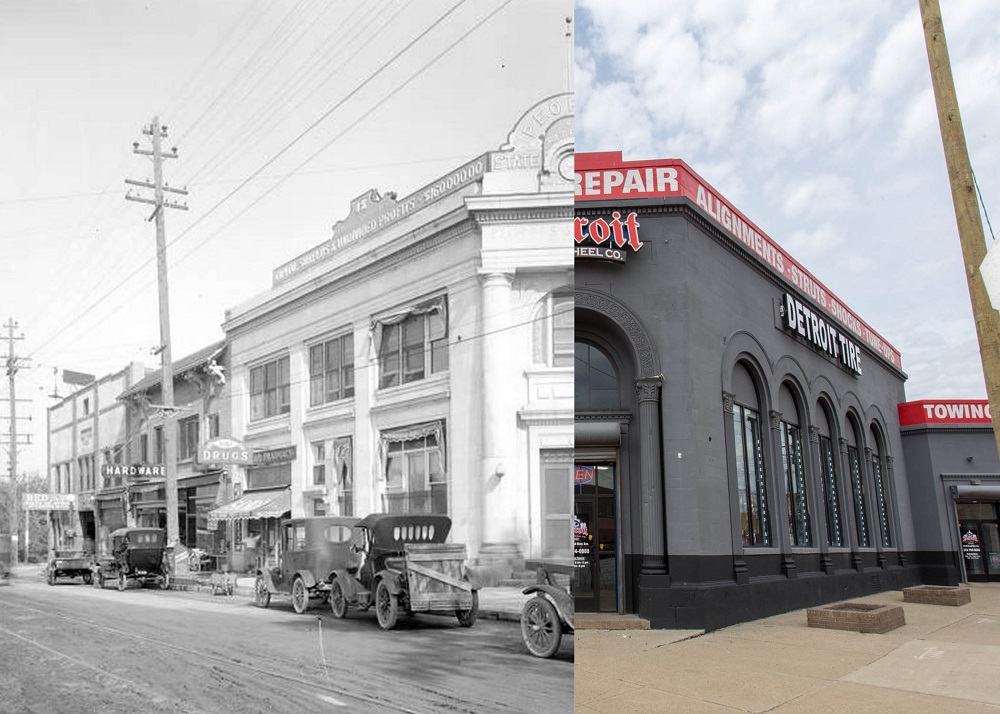 We recently received some awesome items donated by the Burt family (one of our pioneer families). One of the donated items was this cloth bank deposit bag with drawstring closure. It really piqued my interest in the bank. As I began looking into this bank, I came across another one, and then another one. So I set out on a journey of research. I hope this helps paint a picture of what banking was like 100+ years ago.

Redford had three banks in the early 1900s, all with a similar name, size, and exterior features, and within a block of each other – basically a bank on every corner. This area was annexed by the City of Detroit in 1926 and is now referred to as “Old Redford”. It may not be located in Redford anymore, but we love it just the same!

One block from the banks featured in part 1 and part 2, at 22100 Grand River Avenue, is our 3rd and final bank. Wayne County & Home Savings Bank was built in 1928, just 2 years after the area was annexed by Detroit. Even though this building was never technically in Redford, I couldn’t help my desire to find out more about it.

On April 16, 1936 this bank became Detroit Bank & Trust, which we know was there until at least the early 70s. A small addition was built on the Redford Ave side in 1948. Comerica Bank was housed here at one point, although I am unsure of the dates. The building’s current occupant, Detroit Tire & Wheel, has been here for the past 10 years. It’s obvious they have given the building lots of lovin’ – it looks absolutely phenomenal! On the outside you’ll find a night depository box and original dental molding near the top. I thought the exterior was breathtaking…and then I walked inside. My eyes were immediately drawn to the tiered plaster crown molding and a 2nd story office, with intricate detail around the windows, that overlooks the showroom. In the back shop area, part of the bank vault door (manufactured by Herring Hall Marvin Safe Company in Hamilton, Ohio) remains.

The exterior was painted bright blue in Detroit Tire’s early days, then painted all gray. A red accent along the top of the building was eventually added and is the current look today.

The following article was published in the Redford Record, June 23, 1971, in celebration of Detroit Bank & Trust’s 35th anniversary:

Thank you to Amy Barker, descendant of the Houghten family, for providing the newspaper article. I’d also like to thank Detroit Tire & Wheel for letting me invade their space.

Thanks again to the Burt family for donating the deposit bag. It’s an amazing item to have in our collection! Swing by the museum to see it on display.